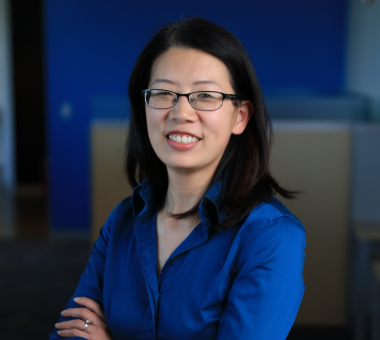 I had the pleasure of sitting down with Wei-Wei Liu, Vice President of Research and Architecture at CyberGrants, where she shared her views on how ambition and luck have helped pave the wave for a successful and rewarding career.

Wei-Wei has been with CyberGrants for over 20 years – joining close to their inception as they pivoted from a customer consulting firm to a giving platform company – straight from John Hopkins with a degree in chemistry and minor in computer science.

Programming was not significant in Wei-Wei’s younger years, with not much more than some introductory programming in grade school and high school. And with an aptitude towards math and science she focused her efforts on hard science, majoring in chemistry and focused on graduating in three years. But towards the end of her college career and after too many hours stuck in a lab, Wei-Wei’s interests began to shift and she decided to take an additional semester to add a computer science minor, taking six computer programming classes in a single semester to achieve her goal.

Despite feeling as if she did not belong and being one of the very few women in these courses, she persevered with the support of some close friends facing the same gender barriers and her father, himself an engineer. Armed with her degree and a concentration in Oracle databases, Wei-Wei was hired at the company that would become CyberGrants, which had only seven employees at the time. She helped to build and scale their grant giving platform and has helped the company grow to over 200 employees. While Wei-Wei has recently moved into a new strategic leadership role, the product development team she helped build is over 50% female.

Wei-Wei, and CyberGrants, have a come a long way. When asked about her most memorable professional successes, she relays, “Getting to the point where we had something we could launch, seeing the first request for a demo, and being able to move our servers from the office kitchen to a data center.”

Wei-Wei attributes much of her accomplishments to hard work and long hours, but also luck. She talked about the balancing act of taking risks and not being reckless, of taking chances, but not doing so in a vacuum. And of course, by surrounding yourself with a diverse team. As she says so perfectly, “One of the things I value the most is that there are differing opinions. Why have a team if you’re just going to reflect my own thoughts? Diversity helps us see more clearly what our options are and how to proceed.”

Wei-Wei Liu is VP of Research and Architecture at CyberGrants, starting even before it was CyberGrants, helping to adapt a custom-built software package to appeal to the commercial market that CyberGrants serves today. She works in close collaboration with the development teams, focusing on system design and architecture, DevOps, and technology strategy and roadmap. Wei-Wei is a knitter, novice carpenter, and a self-described “fussy pastry baker.” Her favorite charities include the Lexington Farm Coalition, MSPCA, and Doctors Without Borders.

Since 1999, CyberGrants has delivered fully-hosted, web-based corporate philanthropy solutions to the most respected companies and foundations in the world. We help large, globally invested organizations quickly activate their charitable causes to realize strategic, measurable outcomes. More than half of the Fortune 100 companies and 18 of the 25 largest corporate foundations are CyberGrants clients. No one has more demonstrated expertise helping global organizations with complex CSR programs achieve Agile Social Impact.