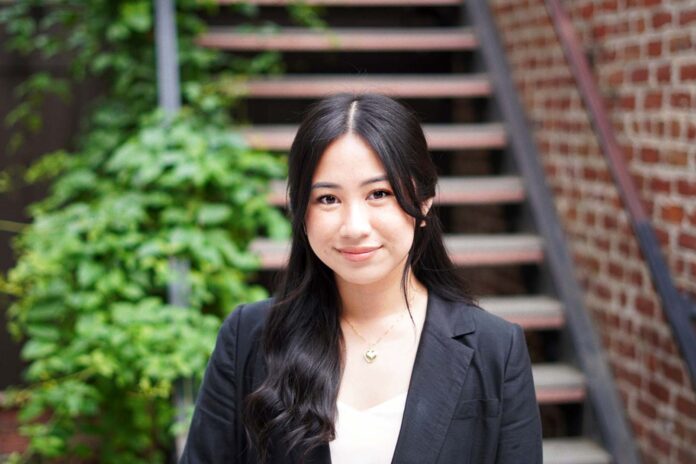 Before joining the Align program in the fall of 2021, LeAnn Mendoza found herself working in a tech-adjacent position, but not quite in computer science.

Between finishing her undergraduate degree at the University of California San Diego and beginning her master’s at Khoury College, she worked full time as a machine learning research assistant at a UCSD ophthalmology clinic. The position lined up perfectly with her bioengineering bioinformatics major. Even so, she always hungered for more.

Now she’s studying data science in the Align program — Khoury College’s master’s program for students without academic CS backgrounds — and aiming to go into the tech industry. But the road there wasn’t exactly smooth.

“I picked an undergraduate major that mixed computer science, biology, chemistry, and physics. I knew even before I did my undergrad that I wanted to do computer science, but I think I always felt rejected by it,” Mendoza said. “I felt like I didn’t fit the mold of a computer scientist, and every time I struggled with learning how to code, I used that failure as confirmation that I didn’t belong in computer science.”

This feeling is impostor syndrome — when a person feels like a fraud in their field and second-guesses their skills and talents. It’s not unique to Mendoza, STEM, or computer science, but for first-generation women of color in a male-dominated STEM field, it can be particularly common and pronounced.

“After my undergraduate degree, I was spending the night just cold applying to software engineering roles at different companies,” Mendoza said. “I ended up actually getting a response back from this one company I really wanted to work at, and it was one of those things where I never thought I would get anything back from them.”

To prepare for the interview at Google, Mendoza practiced writing code in Stack Overflow and sharpened her skills by solving coding problems on LeetCode and HackerRank.

“During that process I was fighting myself on this idea. Why do it? Why did they even pick me? Why am I doing this? I’m not this computer scientist. I wasn’t learning code when I was younger. I just kind of ended up here somehow. I’m an impostor,” she recalled.

Despite her apprehensions, Mendoza made it to the final interview round through preparation and passion.

“I made it to that last round and I felt like ‘Maybe I understand it, maybe all this pressure was just coming from myself,’” she said. “I ended up getting rejected, but I think that showed me my own resilience. Even some of the interviewers that I spoke to commented on some passion they saw in me and I’m like, ‘Wait, you’re right. I do have a passion for this.’”

Even though the full-time role at Google didn’t work out, it still inspired Mendoza to take another step on her computer science journey. She applied to the Align program, where she could refine her skills and meet like-minded people.

“I didn’t know any female data scientists or computer scientists. Growing up, it wasn’t a field I saw my family or anyone around me going into, but what helped me was looking for mentorship and a sense of community in the women in tech space or the Filipino American in tech space,” Mendoza said. “Hearing those stories builds my own confidence in seeing that people have made it in the field I want to be in, and that motivates me to continue because obviously there needs to be more people like us in those spaces.”

Currently, Mendoza is the first Align class at the San Jose campus. After using a data science skillset in her machine learning role at the ophthalmology clinic, she fell in love with the work’s applicability and interdisciplinary beyond medicine, so she chose data science for her master’s.

Mendoza’s passion for computer science extends beyond her perspective as a student, as she loves to teach robotics to children. From elementary school through high school, she was a part of the A.V., broadcasting, and robotics clubs, and Mendoza loves to give back to those tech-based clubs. She also volunteers at Hedenkamp Elementary School teaching kids about computer science. In this area of Chula Vista, California, sandwiched neatly between downtown San Diego and Tijuana, a large percentage of the students are from backgrounds underrepresented in computer science.

“I think it’s important that there’s someone who they can point to for that mentorship that I looked for as a kid,” she said. “It’s important for me to continue to be in those spaces to show ‘I grew up in the same schools that you went to, I have a similar background to you, and here I am. You can also be this way, and if anything, you could take my experiences and end up going way farther than me.’”

This post was originally published by Northeastern University Khoury College of Computer Sciences.