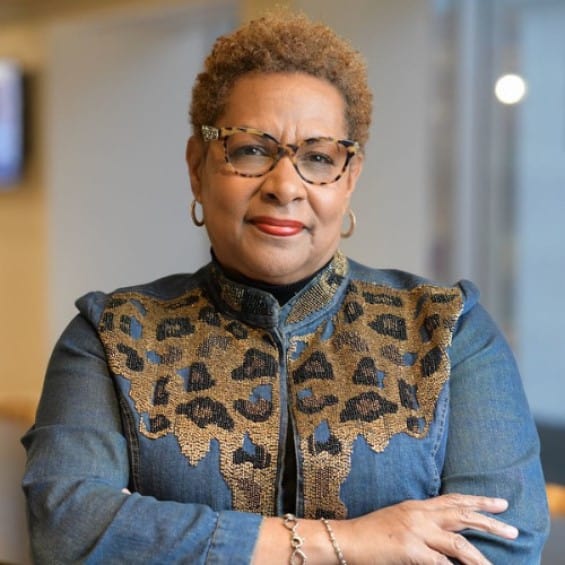 Leading the Way, from IT to HR
Stephanie Browne, Vice President of Talent Acquisition and Chief Diversity Officer at Blue Cross Blue Shield of Massachusetts (BCBSMA) and the 2019 MassTLC Mosaic Award recipient, does not shy away from challenges. Be the only woman of color in the IT department? No problem. Move into HR leadership after a career in IT? Sure. Teach vineyards how to market to women and people of color? Why not? This willingness to take on tough tasks and lead the way has allowed Stephanie to do what few others have been able to do – move the needle on making her company’s workforce look like the diverse customer base that it serves.

For most of Stephanie’s career she has been an IT leader, starting back in the late 1970s when there were few women and few people of color in the field, never mind in leadership positions. After over thirty years in IT, with over twenty of them at BCBSMA, Stephanie was tapped to lead both Talent Acquisition and the company’s D & I initiatives. While these two roles both deal with hiring, in some companies they can have conflicting goals as a company’s need to fill many roles quickly may take precedence over its desire to have a more diverse workforce. Stephanie credits her leader with bringing the two roles together and having the wisdom to see that they were complementary and necessary pieces in any effort to effect quick change.

Over the past three years, Stephanie has worked to educate and demonstrate why diversity and inclusion matter from a business perspective. BCBSMA’s customers are a cross-section of the population, and the company’s CEO has been verbal and demonstrative about diversity, access to affordable healthcare for all (not just for customers), and contributing to the local community. Building a workforce that reflects that community brings the customer’s voice inside the company. Today, BCBSMA’s workforce:

Changing Hearts and Minds
When asked what her biggest surprise was when she moved into her current roles, Stephanie didn’t hesitate to say, “How hard it is!” Changing an organization begins with changing people’s hearts and minds, and that is a continual one-on-one effort. Convincing hiring and business leaders that making their teams look like their customers would be good for business is a never-ending job.

So how does someone relatively new to HR do that? That’s where Stephanie’s people skills come in. Throughout her career, she has had to work across business groups with all types of people, and she has always managed to build positive relationships. She has also volunteered in a range of community organizations – including the Girl Scouts, The Boston Club, The LINKS – focused on helping others, particularly the underserved, achieve their goals. Nurturing, supporting, and mentoring others are all things that Stephanie relishes, and she brings that joy in connecting with people to her job.

She also recognized that she does not, and cannot, work alone. She credits her wonderful and supportive team that embraces the challenge of thinking holistically about diversity as well as the company’s diversity committee and the leaders who support it. Her gratitude extends outside of BCBSMA to industry peers who have shared their knowledge and experience with her. As she says, “Nobody does this work in a silo.”

Bringing Diversity into Everything
Two of the initiatives of which Stephanie is most proud – recreating BCBSMA’s career brand and developing a strategy that brings diversity into everything, not just hiring – involve that connection between workers and customers. For the career rebrand, Stephanie focused on people, not jobs. She set about showing the external world that she wanted everybody regardless of age, race, gender, sexual orientation, etc. How did she do that? She used real BCBSMA employees in the campaign, called “Bring Your True Colors to Blue,” to show that the company was welcoming and to show existing employees that they were valued. In fact, the campaign was launched internally first as a way to celebrate the people who were already there.

Building diversity into every aspect of the business also catalyzed BCBSMA’s innovation and customer service efforts. By having a diverse workforce, the company is able to collect diverse ideas on product offerings and ways to serve its customers. Working from the knowledge that employees are also customers, BCBSMA is able to test new offerings and build net promoters within its workforce. The employee resource groups (ERGs), which Stephanie oversees in her role, often serve as a way to ensure that offerings meet the needs of a wide range of customers.

The idea of having diversity as an integral of everything can be summarized in what Stephanie calls the 4 C’s:

By working on all four of these areas, Stephanie has been able to ensure that BCBSMA’s commitment to diversity and inclusion is holistically viewed and not treated as a separate, non-strategic program.

Diversity and the World of Wine
Stephanie brings her belief in the benefits of diversity to her outside interests as well. In addition to volunteering with community groups that focus on improving the status of women, girls, and people of color, she founded a wine club, Divas Uncorked, to help women and people of color learn about wine. As the club grew, wineries began to take notice and to realize that they needed help in marketing to these demographic groups and turned to Stephanie and her fellow club members. They worked with a handful of wineries to advise them in their marketing efforts. The group’s fame and influence are so great that Stephanie was the first African-American woman, and only the second woman ever, to open the famed Nederburg fine and rare wine auction.

We are thrilled to recognize this amazing and bold leader as our 2019 Mosaic Award recipient. Come help us celebrate Stephanie Browne on November 6th.