Congressman Seth Moulton joined MassTLC member executives for a roundtable discussion on tech talent followed by the announcement of a bipartisan apprenticeship bill, the Championing Apprenticeships for New Careers and Employees in Technology (CHANCE in Tech) Act.

The roundtable was held in the Sixth Congressional District at MassTLC member company EBSCO Information Services, in Ipswich, MA, on July 10th. Joining Congressman Moulton and his staff were senior executives representing MassTLC and the following member companies ATN International, Cadence, Care.com, EBSCO Information Services, MITRE, Rocket Software, Vecna, and Verizon, plus invited guests from the Enterprise Center at Salem State, the North Shore Alliance for Economic Development, the North Shore Workforce Investment Board, and the Rocky Hill School. Attendees had a lively discussion around tech talent challenges and opportunities. 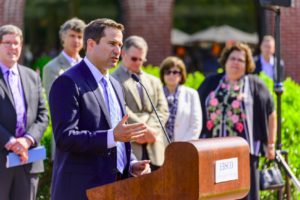 Attendees reflected the views of over 150 senior tech leaders surveyed for MassTLC’s forthcoming Tech Pulse survey that “access to talent” was the number one reason for locating in Massachusetts but also the biggest challenge to growth. The tech sector and tech occupations contribute more than $80 billion to the Massachusetts economy and employ close to 400,000 workers, yet 23,000 tech jobs remain unfilled.

This tech talent crisis is not unique to Massachusetts. “The U.S. is expected to have 1.8 million unfilled tech jobs by 2024,” said Elizabeth Hyman, CompTIA’s Executive Vice President of Public Policy in a statement. “The deficit is not because of a lack of desire by American workers, but a dearth of workers with the necessary IT skills. If neglected, the IT skills gap will affect our country’s ability to protect national security interests and to compete economically on the global stage.”

A majority of these jobs today require a traditional college degree. Meanwhile, data shows that in Massachusetts alone, half of all high school graduates won’t go on to complete a college degree within six years despite the fact that many of them have the aptitude to succeed in a tech career and would excel in a hands-on learning and working environment.

In February, MassTLC led a delegation of tech leaders from member companies Acquia, Carbonite, Oxfam America, PTC, and Wayfair to meet with our Congressional Delegation. In addition to cybersecurity, IoT, and open data, we discussed the tech talent crisis, and, working with our national partner, CompTIA, we and our peer councils across the United States, made the case for the CHANCE in Tech (Apprenticeship) Act.

This bipartisan bill seeks to address the growing skills gap in the technology sector through expanding and investing in tech apprenticeship programs. “Our economy is changing, and we must prepare our current and future workforce for the jobs of the 21st Century,” said Congressman Moulton. “This bill will allow industries, academic institutions, vocational and technical schools, and workforce development programs across the country to form partnerships and train Americans for the new economy. I am proud to be joining my colleagues in leading this bipartisan effort to help American workers move our economy forward.”

More about the announcement: