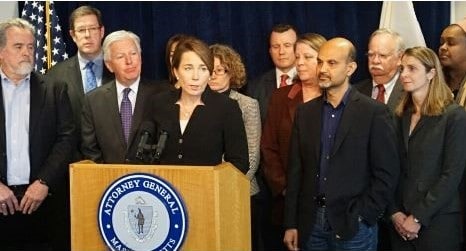 After yesterday’s historic inauguration of President Joe Biden and Vice President Kamala Harris, the first woman and the first person of color to serve as vice president, the President made history in righting a wrong of not only direct consequence to the tech community in Massachusetts but to the innovation and economic stability of the entire nation.

Four years ago, as the CEO of MassTLC, I stood with Attorney General Maura Healey as she launched her legal challenge to the prior President’s Executive Order barring entry into the United States by individuals from several majority-Muslim countries, commonly known as the Trump Travel Ban. I did this not only on behalf of the tech sector but because we believe in inclusivity, and the practice of rooting out legal immigration based on color or religious beliefs brought a stain to those beliefs.

Over the ensuing days and months, we invited the tech community to quantify the impact the travel ban was having on our companies. When Travel Ban II exempted those currently employed, we produced a comprehensive report documenting the economic impact that these immigrants have on our state and our nation. We thank the economics consulting firm Analysis Group for the excellent work undertaken by a large case team that researched, analyzed, and compiled a considerable amount of empirical evidence on the impact of immigration on economic growth, the labor market, innovation, and entrepreneurship in the US. We also thank Foley Hoag, who represented MassTLC as we filed five amicus briefs in various District and Appellate Courts and two additional briefs in the United States Supreme Court.

Immigrants play a vital role in the tech sector, as innovators and as job creators. The Travel Ban substantially undermines the ability of the Massachusetts technology industry to compete in the international marketplace by, among other things, discouraging potential investors, entrepreneurs, and customers from traveling to the U.S. and by discouraging talented students from studying at local universities.

While Justice Sotomayor, Ginsburg and Breyer supported our position, citing our work in both dissenting opinions, the majority of justices ultimately upheld the Travel Ban. We knew the Court was on the wrong side of history and hoped that Congress would clarify the issue in law, which unfortunately, has not yet happened.

Today we celebrate President Biden’s Executive Order on day-one of his Administration to repeal the Travel Ban. That order, along with the President’s call for Congress to grant a path to citizenship for 11 million undocumented immigrants, has put our nation back on a path towards equitable innovation and economic growth.