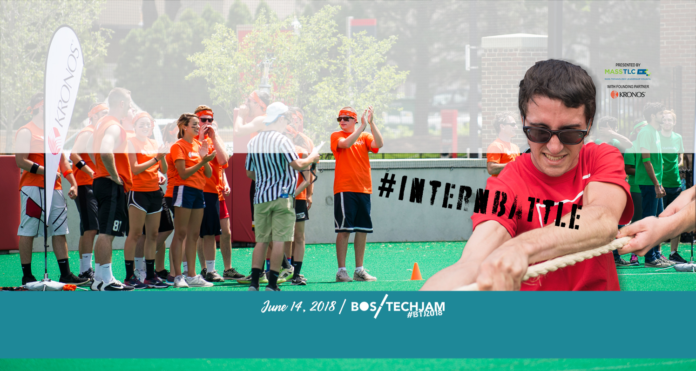 For the first time in its history, the annual Battle of the Interns will be part of Boston TechJam, presented by MassTLC with founding partner Kronos Incorporated. Interns and co-ops from Massachusetts’ most innovative technology companies will compete in a scavenger hunt throughout Boston on Thursday, June 14, concluding at TechJam on City Hall Plaza, where interns will join the 8,000-person block party festival that celebrates the region’s innovation economy.

Founded by Kronos in 2015, the annual Battle of the Interns event celebrates Massachusetts’ continued passion for innovation, education, and technology while cultivating the next generation of leaders. By merging the competition with Boston TechJam, hosted by MassTLC, interns will have free access to the area’s premier networking event celebrating a mutual passion for innovation and technology leadership.

The winning intern team will win $3,000 to be donated to a charity of their choice, while the top three teams based on accumulated scavenger hunt points will be recognized at an award ceremony to kickoff Boston TechJam.

This year’s teams of interns – from leading technology companies such as Cadence Design Systems, Inc., Carbon Black, Epsilon, Kronos, and MathWorks – represent dozens of colleges and universities from around the country. They will race through the streets of Boston on a scavenger hunt competition to test their intelligence, ingenuity, endurance, and teamwork skills.

“We’re thrilled to see something that started as a Kronos-only event in our parking lot five short years ago rise to new heights by partnering with MassTLC at Boston TechJam,” said David Almeda, Chief People Officer at Kronos. “The annual Battle of the Interns event has quickly become a tradition that provides the next generation of technology leaders with a unique opportunity to grow, network, and share their passions. We’re proud to have one of the most respected intern programs in the region. Merging the event with Boston TechJam gives our college-aged Kronites and others competing a chance to gain a deeper knowledge on our tech economy, access to new career opportunities, and exposure to different organizations – all intended to help them discover their future career paths.”

Competitors and spectators will also have the opportunity to network with technology professionals and business leaders at this year’s Boston TechJam event, a showcase and accelerator for new ideas and world-class innovations coming out of Massachusetts, which is anticipated to host more than 8,000 at City Hall Plaza.

“The Boston region has some of the brightest technology and business students, and connecting that group to the area’s innovation ecosystem is a big part of our mission,” said Christine Nolan, co-founder of Boston TechJam and MassTLC Sr. Director of Communities. “Bringing Battle of the Interns to Boston TechJam is the perfect platform to get this area’s future entrepreneurs and leaders exposed to all the amazing companies and opportunities here, and to see firsthand how dynamic our tech culture is. There’s no better place to build or be part of growing a business.”

Boston TechJam Battle of the Interns will commence Thursday, June 14 at Boston City Hall Plaza, with opening ceremonies beginning at 2:15 p.m. and the scavenger hunt starting at 2:30 p.m.

The last day to register intern teams for the competition is May 15 and each intern participant will receive free admission to Boston TechJam.

About Battle of the Interns

Battle of the Interns celebrates Massachusetts’ passion for innovation, education, and technology leadership. Kronos founded Battle of the Interns in 2015, born out of the company’s commitment to inspiring the next-generation workforce. The event brings together top tech talent in a friendly competition of brains and brawn presented by MassTLC in partnership with Kronos.

Kronos is a leading provider of workforce management and human capital management cloud solutions. Kronos industry-centric workforce applications are purpose-built for businesses, healthcare providers, educational institutions, and government agencies of all sizes. Tens of thousands of organizations — including half of the Fortune 1000® — and more than 40 million people in over 100 countries use Kronos every day. Visit www.kronos.com. Kronos: Workforce Innovation That Works.

As the largest and most powerful technology association in the region, MassTLC’s mission is to accelerate growth and innovation in the Massachusetts technology industry. For more than 30 years, MassTLC has served as the premier network for thousands of companies and entrepreneurs seeking valuable connections.

Northeastern University at BTJ: Learn more about AI and the brain, Khoury College of Computer Sciences, our Align program, how you can partner with...