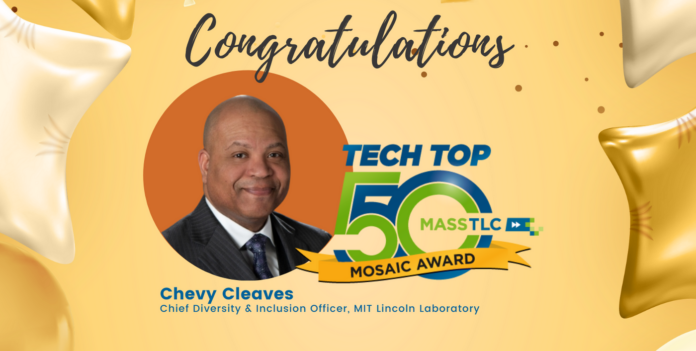 Pilot. Pilot instructor. Aerospace strategist. Diversity leader. While it may seem like one of these terms doesn’t go with the others, they all apply to this year’s Mosaic Award Recipient, Chevalier “Chevy” Cleaves, Chief Diversity and Inclusion Officer at MIT Lincoln Laboratory. All of Chevy’s varied professional and life experiences have contributed to developing the dedicated and visionary leader whom we are honoring for his work creating access and opportunity for future leaders.

Chevy’s work today embodies the lessons he learned at every step of his career path. He was a cadet at the US Air Force Academy when he first embraced making a commitment to something bigger than himself. As an aerospace and information operations strategy leader, Chevy absorbed the importance of strategic thinking.  Serving as the first head of diversity and inclusion at the US Air Force Academy, he saw that success could be duplicated with the right approach and resources.

Drawing on his background as a strategist and an expert in information operations, Chevy approaches his work with a “systems mindset.” That is, he rejects the notion that DEI is only about recruiting. He believes that bringing in diverse talent is 10-15% of the equation. The rest is developing, progressing, and retaining diverse talent so that they can maximize their contribution to the organization, its goals, objectives and outcomes. Bringing in people and watching them leave does not contribute to the organization’s success. Chevy also recognizes that organizational priorities change, e.g., a company’s product focus may change, and it is always critical to show that diversity and inclusion will make those transitions more successful.

He also is adamant that DEI leadership requires specific skills, not just passion. It is a profession like any other that requires knowledge and experience in the space. As Chevy noted, “This is very difficult work, it’s lonely work, and it’s not well understood broadly.” For this reason, Chevy spends some of his free time mentoring others so that they may move into DEI leadership roles. He also values the opportunity to learn from his peers, since no one person knows everything in this space.

Chevy’s career started as a cadet at the Air Force Academy where he earned both a Bachelor of Science degree and a commission as an officer in the U.S. Air Force (USAF). The Academy is focused on preparing future leaders and instills the notion that everyone there is working toward and contributing to something much more important than just their own goals. For Chevy, his time at the Academy was a “stretching” experience that he fully embraced. After the academy, Chevy became a pilot, then a pilot instructor, and a pilot evaluator. As an officer, Chevy was ultimately selected for a command position where he was honored to have the opportunity to serve others while leading them in their service to the nation.

The next stage of Chevy’s career, and one where he added skills that have become central to all his work, was when he became a strategist in the areas of aerospace and information operations. In this role, Chevy needed to develop strategies to address challenging situations as well as navigate large, complex organizations to implement those strategies. All these skills helped him when he made the difficult choice to forgo another command opportunity and become the Director of Admissions at his alma mater as well as the Academy’s first Chief Diversity Officer. This was his “first foray into diversity, equity, and inclusion [DEI] as a practitioner.”

Luckily, Chevy had a strong supporter and visionary in the Academy’s Superintendent, who understood that creating next generation leaders who would pursue different endeavors after serving their country required bringing in students of ability and character from all across the nation’s demographics. The U.S. is a diverse country, so creating leaders in only certain spaces reduces the country’s potential. The Superintendent also understood that DEI had to be part of every aspect of the academy, not just the student body, and Chevy had the ability to drive change in a variety of areas, all with the goal of improving outcomes, which the academy saw and for which it was recognized.

The focus on organizational and national success flows through all of Chevy’s work. For Chevy, DEI is not about giving someone an advantage, it is about improving organizational outcomes by “removing artificial barriers that prevent people from contributing to their maximum ability.” To him, this is the definition of inclusion.

necessary. As Chevy states, many leaders think that they can solve diversity and inclusion issues and then move on, but organizations are not static. People leave, and new people join. Companies grow. Focus changes. This dynamic aspect of organizations means that we don’t ever fully get there with DEI, and DEI leaders have to continually show the value of inclusion.

Leading amazing teams to create tremendously successful results at the Academy, in industry as Boston Scientific’s first VP of Global Diversity and Inclusion, and then as the first Chief Diversity and Inclusion Officer for the United States Air Force helped Chevy to “further emphasize the strategic importance of diversity and inclusion not just for individual organizations but for the nation.” He also realized that with the appropriate elements, DEI success can and must be duplicated at other organizations.

Today, Chevy serves as the first Chief Diversity and Inclusion Officer at Lincoln Laboratory, although he is quick to note that the vision for making Lincoln Laboratory an inclusive organization goes back 15 years to the leadership of Dr. Eric Evans who began and continues to lead a very specific commitment to success. Dr. Evans brought in Bill Kindred to drive the lab’s DEI work. Chevy credits Bill with laying a “fantastic groundwork” on which he and his incredibly talented team can build.

All these leaders recognized that innovation, the core of Lincoln Lab’s mission, thrives at the nexus with diversity and inclusion. Allowing people to contribute with all their ability leads to great ideas and organizational success. As Chevy says, part of the “secret sauce of DEI work is to help leaders understand not just the importance of diversity and inclusion but also that there is no sustainable way forward without their engagement and accountability.”

We are thrilled to recognize Chevy Cleaves with the 2021 MassTLC Mosaic Award for this work in creating opportunities for others. As he summed up his commitment to diversity and inclusion: “This is legacy work for me. And I try to remind others, especially those who may be nearing the end of their careers, that this can still be legacy work for them.”