The MassTLC Future of Transportation in Boston event brought together a crowd of techies, entrepreneurs, city and state officials, and the public interested in current and future transportation efforts underway and how their commute and mobility might be affected.

Keynote John Moavenzadeh, head of Mobility Industries and Member of the Executive Committee at the World Economic Forum gave the audience a view of global trends in urban mobility.  He was followed by Nigel Jacob, co-founder, New Urban Mechanics for the City of Boston, who spoke about Boston and smart mobility, the vision and action planning with public engagement embedded in the process, Go Boston 2030 and the need to coordinate and collaborate, and touched on autonomous vehicle testing in the Seaport.  Norm Gorin and Brad Bellows from the North South Rail Link Working Group followed discussing the initiative to bridge the gap between the North and South Stations.

During the New Technology – Beyond the Personal Automobile session participants discussed what’s in store for the future.  Mike Stanely, CEO and Founder of TransitX showed pods that could quietly fly above traffic under a narrow track.  A student team from Northeastern (Ben Lippolis, Manny Barros and Ted Rausch) shared their Hyperloop technology, a conceptual high-speed transportation system which pressurized capsules ride on an air cushion thru a tube structure, and experience at the national competition in California just a week ago.  And Sasha Hoffman, COO at Piaggio Fast Forward shared the company vision for personal lightweight mobility while their newly launched Giti, an intelligent cargo vehicle, navigated thru the audience delivering chocolates!
The final panel discussed Autonomous Vehicles, moderated by Paul Schmitt, MassRobotics Director, Autonomous Vehicles and included:

Topics of discussion included levels of automation, safety and convenience as well as testing – nuTonomy’s automated vehicle showed up for the reception.

During networking breaks and at the reception attendees were treated to demonstrations from the following companies: 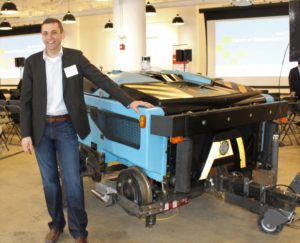 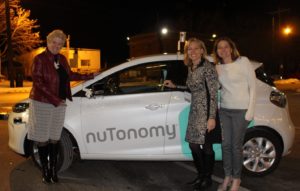 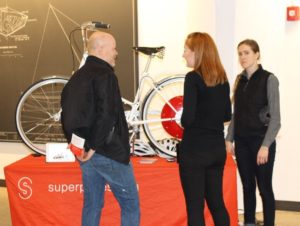 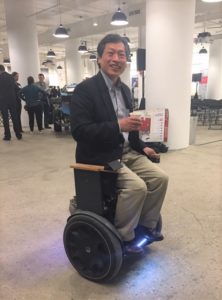