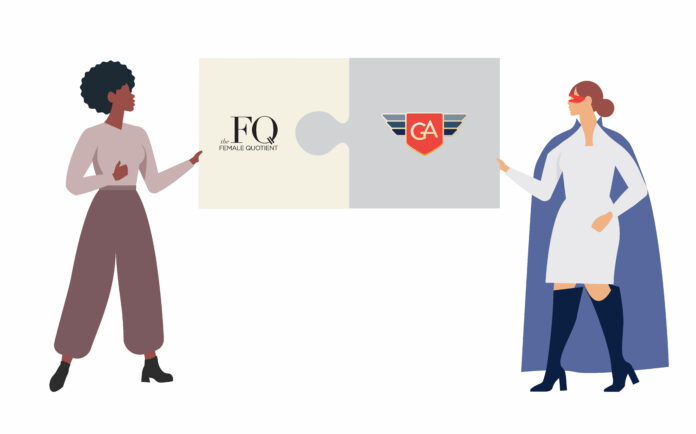 GenderAvenger, a nonprofit that gives everyone the tools to make sure women’s voices count in the public dialogue, announced today that it is joining forces with The Female Quotient (The FQ), a company changing the equation and closing the gaps. The collaboration aims to remove barriers and break down the intimidating scale of the equality conversation happening all around the world.

With women only making up 20% of news sources, 28% of keynote conference speakers, and underrepresented in all decision-making levels of government worldwide, women are inadequately represented in almost all public forums and mediums. The collaboration between GenderAvenger and The FQ aims to bridge that gap and accelerate gender equality for all types of activists.

Fueled by the ideas, ambitions, innovations and empathy of a network of 50,000 working women around the world, The Female Quotient is a collaborative global effort to eliminate the gender gap. While led by women, engaged and inspired leaders join this collective enterprise. The FQ’s diverse mix of live events, online forums, custom research, media, and corporate advisory services identifies challenges, surfaces effective strategies, forges powerful networks, and ultimately sparks measurable progress. With GenderAvenger’s community of engaged advocates, this collaboration will further amplify women’s voices in every corner of the world, putting accountability back on the map.

GenderAvenger will be led under the direction of The FQ and its CEO, Shelley Zalis. Gina Glantz, founder of GenderAvenger, will remain on Gender Avenger’s executive team.

“If recent events have shown us anything, it’s that we can, and must, do more for gender equality,” said Zalis. “We’re honored to continue the impact GenderAvenger has created for women on public stages. We’ll continue to support and use this moment as a catalyst to further amplify our shared efforts in changing the equality equation.”

“Equality is too urgent for anything less than bold accountability and decisive action,” said Glantz. “When thinking about bold decision-makers, Shelley is a leader with the imagination and drive to ensure that GenderAvenger will reach the scale necessary to accomplish its ambitious mission of ensuring that women are always part of the public dialogue.”

As a testament to Zalis’ commitment to advancing equality, the organization is debuting The FQ Toolkit alongside this announcement. The toolkit takes a data-driven approach to empower people and organizations to investigate and assess levels of inequality, and then act to change the equation and close the gaps. Including tools like the GenderAvenger Tally, Speaker Equity Assessor™, Advancing Equality Calculator™, and The FQ Equity Index.

GenderAvenger is an online activist community dedicated to ensuring women are always part of the public dialog … because women’s voices count. The success of GenderAvenger is rooted in its simplicity. The clarity of its mission and the user‐friendly tools it provides to individuals to take action has powered GA growth and impact.

The nonprofit organization has created three primary tools — GA Tally, GA Action Alert, and GA Stamp of Approval — to communicate the value of gender balance in the public arena. Each tool creates specific opportunities and incentives to increase individual participation in guaranteeing gender balance and to broaden awareness of its importance. www.genderavenger.com

ABOUT THE FEMALE QUOTIENT

The Female Quotient (The FQ) is changing the equation and closing the gaps. The FQ’s diverse mix of live events, online forums, custom research, media, and corporate advisory services identifies challenges, surfaces effective strategies, forges powerful networks, and ultimately sparks measurable progress. Through its intensive engagement with women around the world, in multiple industries, and at every level, The FQ has a rare understanding of what is on the minds of working women and what specific needs must be addressed to confront existing inequalities. For more information, visit www.thefemalequotient.com.