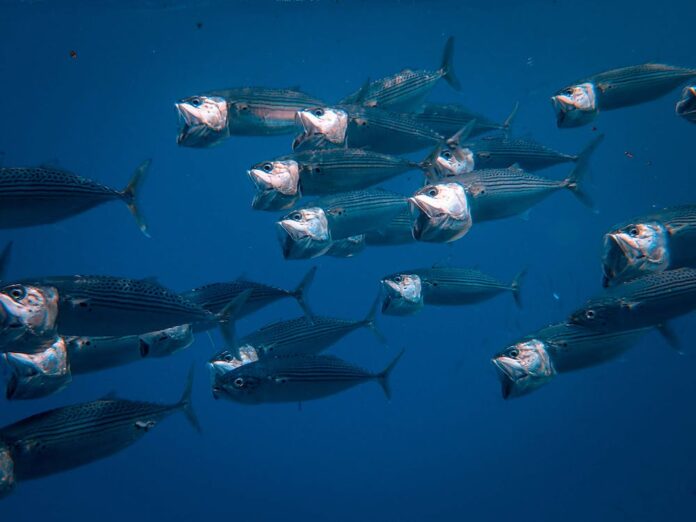 In the fall of 2021, California-based FISHBIO performed live trials of Innovasea’s V3D predation tag to quantify performance metrics for the novel transmitter’s predation trigger mechanism and measure its efficacy in detecting when a tagged fish has been eaten.

How did the tag perform?

“We were very impressed with the performance of the V3D during the live feeding experiments,” said Michael Hellmair, a fisheries biologist at FISHBIO. “We can envision the tags being especially useful for several applications such as measuring the effect of predation in salmonid survival studies.”

Innovasea’s V3D tags are equipped with a special polymer designed to dissolve during digestion of the tagged animal, thereby signaling that predation has occurred.

When first implanted in a fish, the V3D transmits a unique identification number. Once the polymer coating reacts with the acidic environment of the predator’s digestive system, the tag transmits a new ID number, allowing researchers to discern a predation event.

Researchers at FISHBIO performed several independent trials over a six week period using tagged rainbow trout as the prey and largemouth bass as the predator. The goal was to evaluate:

Rainbow trout were used as the prey species because they were readily available from a local hatchery and come in the size range appropriate for the V3D. Future research uses for the tags are expected to focus on juvenile salmonids, which have similar physiology.

Researchers chose largemouth bass as the predator species because of their readiness to consume prey. The predators were not fed outside the feeding trials to increase their appetite.

To evaluate tag performance, researchers implanted V3D tags in the trout and then fed the trout to the bass. They recorded the time of feeding, the time of the tag’s ID code change, the time elapsed between predation and tag expulsion from the predator, and how the tag was expelled (defecation or regurgitation).

Each temperature treatment consisted of three feeding trials using eight tagged rainbow trout per trial. Each feeding trial was conducted independently over the course of one week for three consecutive weeks. In total, 24 bass feedings were conducted per temperature regime for a total of 48 feedings across all trials.

The feeding trials resulted in a 100 percent trigger rate for transmitters in prey fish consumed by largemouth bass, with 96 percent triggering within 24 hours. The tags activated faster in the warmer water, with a median trigger time of 6 hours compared to a median trigger time of 14 hours in the cooler water. This was likely associated with faster metabolic processes in warmer temperatures.

Furthermore, no false positives or false negatives were observed.

For species that maintain a small home range or exhibit high site fidelity, there are several applications for understanding species interactions. There is significant value in using V3D technology for localized predation studies such as around fish passage structures, small-scale high-density arrays, gates and weirs.

This post was originally published on the Innovasea blog.