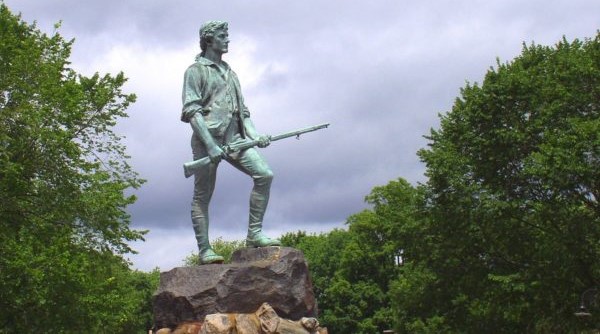 Anyone who has studied United States history, even if only at elementary school level, is familiar with the Massachusetts town of Lexington. The site of the storied battlefield and the “shot heard round the world” that kicked off the American Revolutionary War in the late eighteenth century, Lexington is rich in history and natural beauty. Though only fifteen miles northwest of downtown Boston, it feels a world away.

Thousands of visitors annually journey to Lexington to see landmarks like Minuteman National Park and Battle Green for themselves, but it’s not only tourists who are attracted to the town. Increasingly over the last few decades, Massachusetts’ tech companies and workers have discovered it too.

Revolutionary in Tech
Lexington’s role in the American fight for independence may be the history for which it’s most widely recognized, but notably, the area has a rich and equally revolutionary history in the region – and nation’s – technology sector.

In 1951, well before the high-tech boom of the 60s and 70s that famously attracted talent to the 128 corridor region, MIT Lincoln Laboratory broke ground at a site in Lexington on land that is now Hanscom Air Force Base. In fact, the federally funded project, which focused on improving the nation’s air defense system through advanced electronics, was in many ways a precursor to the 128 corridor’s high-tech boom itself. Talent flocked to the region, and, as a result, service and support companies followed.

Today, that legacy continues. Lincoln Laboratory, which has since expanded its mission to include any application of advanced technology to problems of national security, remains a major regional economic stimulant and ecosystem hub. Tech companies of all sizes and service providers continue to thrive as a result.

With proximity to top universities and medical centers, as well as to both the 128 corridor and the city of Boston, Lexington and its surrounding towns have become a powerful tech cluster in their own right. Employers and employees alike find the region to be a great place to do business as well as a great place to live.

An Alternative Lifestyle
“This whole area is a great place to live and work,” says Kelliann McCabe, Chief People Officer at Imprivata, an IT security company based in Lexington. “We’ve had a good ten years so far being able to balance both the growth and the focus of the business, while being able to attract and retain people.”

When Imprivata’s founders started the business in 2002, Lexington was a natural fit. “The original founders had worked close to the 128 belt, but [this area] had a little more appeal since it wasn’t directly on the highway,” notes McCabe. “It was off the beaten path.”

Being off the beaten path, of course, has its pros and cons, of which Imprivata and other regional companies are well aware. Says McCabe, “We are who we are, and we embrace this. We appeal to a hiring base that’s very diverse, we can attract people who like to live where they work, and we also attract interns and new grads who are looking to do a reverse commute outside of the city.”

For those coming from the city, there is the REV Shuttle commuter bus that comes from Alewife Station, and several Imprivata employees take advantage of it each day. And for those seeking a more active commute, there is the historic Minuteman Bikeway, a ten-mile paved rail trail connecting Alewife station to Bedford and passing through Lexington along the way. At Imprivata, which sits directly across from the bike trail, employees take advantage of the scenic area to walk, run, rollerblade, and even check out company bikes to use along the trail during the workday.

“We have a unique offering. We leverage our strengths,” says McCabe. “We don’t pretend to be a company that’s based in Cambridge or Boston. We provide an alternative for people instead.”

Leading the Way
For those hoping to avoid a long commute without sacrificing proximity to action in the tech sector, Lexington – with its natural spaces and renowned school system – is a great choice.

“It’s a great community,” emphasizes McCabe. “There is a rich history and a lot of pride in the area. Lexington is thoughtful about how they use facilities and property. There has been a lot of revitalizing in this community, and there are a lot of new businesses that want to be a part of the area and invest in it.”

Lexington, thanks to both established giants like Lincoln Laboratory and newer players like Imprivata that call it home, remains one of Massachusetts’ most important technological hubs outside of the city. “One of the best things that Boston has done over the long term is to develop a circle of tech hubs that surround the city,” says McCabe. “We’re not in no-man’s land. It’s both – there’s no one or the other.”

The region may be best known for the historic role it played in the American Revolution, but that past is only part of its ever-evolving story. Poised to lead well into the future, Lexington and surrounding towns have revolutionized what is possible for Massachusetts technology economy and beyond.