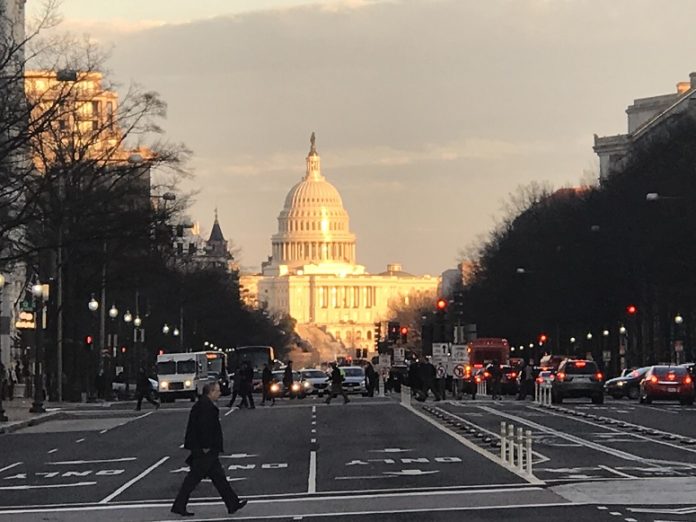 MassTLC led a delegation of technology leaders to Washington in mid-February as part of our annual DC Fly-In, held in conjunction with CompTIA, the Tech Councils of North America (TECNA) and CyberUSA. The Massachusetts delegation included Adam Bosnian, EVP, Global

The Massachusetts tech delegation joined approximately 150 other technology executives from 27 states and province across North America for a 2-day tech policy summit, organized by CompTIA, to hear from lawmakers and policy experts on workforce, blockchain, 5G, IoT, and more. The first day of the summit culminated in a Tech Champions Awards Dinner, honoring, among others, our very own Congressman Seth Moulton for his leadership in sponsoring and building support in the House for the CHANCE in Tech Act.

The CHANCE in Tech Act is a bipartisan bill that seeks to address the growing skills gap in the technology sector through expanding and investing in tech apprenticeship programs. “Our economy is changing, and we must prepare our current and future workforce for the jobs of the 21st Century,” said Congressman Moulton at the bill announcement last summer. “This bill will allow industries, academic institutions, vocational and technical schools, and workforce development programs across the country to form partnerships and train Americans for the new economy. I am proud to be joining my colleagues in leading this bipartisan effort to help American workers move our economy forward.”

of our Congressional Delegation a year ago during our 2017 Fly-In and the Congressman announced his sponsorship at a MassTLC roundtable in July at MassTLC member company EBSCO Information Services in his district. We continued to champion the House bill and a companion bill in the Senate this year, and, within hours of our meeting, Senator Markey had signed on to the bipartisan, bicameral effort as well.

In all, MassTLC and our tech delegation met directly with Senators Edward Markey and Elizabeth Warren, as well as with Representatives Katherine Clark, Joe Kennedy, III, Seth Moulton, and a tech policy aid to Representative Capuano, to advocate for the CHANCE in Tech Act and discuss other tech policy issues.

Cybersecurity was one of the key policy issues discussed throughout the Fly-In events. Our CyberMA affiliate, powered by MassTLC, took the opportunity while our delegation was in DC to partner with the national CyberUSA and regional CyberOregon groups to host a Cyber-Policy briefing.  The briefing, led by the U.S. Department of Homeland Security and other federal experts, explored current and proposed policies affecting cybersecurity at the federal level.