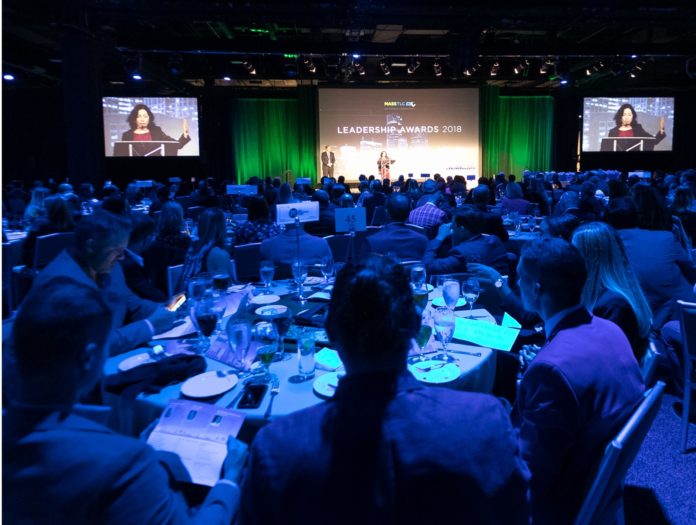 Each year, as part of its Leadership Awards program, MassTLC confers its Distinguished Leadership Awards on individuals who have made, and continue to make, an exceptional impact on the Massachusetts technology ecosystem. This year these honors include the Commonwealth, Innovation Catalyst, and Mosaic awards, and we have three outstanding honorees whom we will be recognizing on November 6th at our 22nd annual Leadership Awards celebration.

Avid makes video, audio and film editing systems that make, manage and move media. At Avid, Bill won an Emmy from the Academy of Television Arts and Sciences in 1993 for the development of the Avid Media Composer. In 1999 the Academy of Motion Picture Arts and Sciences presented Avid with the Oscar® for its success in transforming the editing process in filmmaking.

Since 2000, Bill has shared his time between work with non-profits, and a focus on helping entrepreneurs. In 2002, Bill started a low-cost, shared-space center for entrepreneurs called the Collaboration Space (now Brickyard Collaboration Space) at Warner Research. In addition, he has acted as an angel investor for eight startups, and for three non-profits. Bill is also working on book about entrepreneurship called “Intention and Invention.”

Bill has been a long-time trustee of the Massachusetts Technology Leadership Council, and has taught classes for entrepreneurs through that organization. In 2008, he created and co-chaired the MassTLC Innovation 2008 unConference.

The Mosaic Award recognizes an individual whose work in promoting inclusion and diversity in the workplace has effected meaningful change within their company. This year’s Mosaic Award recipient is Stephanie Browne.

Stephanie Browne is Vice President of Talent Acquisition and Chief Diversity and Inclusion Officer at Blue Cross Blue Shield of Massachusetts. In her role as a Human Resources Executive she is responsible for recruiting, retaining and developing a high performing staff and culture. She is also responsible for the execution of the company’s talent sourcing, diversity recruiting, and career brand strategies.

BCBSMA’s role in the community as an employer of choice for top talent from all backgrounds and personal history. She co-chairs the Diversity Council with the CEO and is responsible for developing and facilitating the D&I Strategy of the company, including the design and execution of the company’s Diversity & Inclusion goals and reporting.  In addition, Stephanie manages eight Employee Resource Groups that deliver programs to support business operations inclusion best practices and is responsible for the design and delivery of D&I best practices education and forums to foster inclusion in the workplace.

Outside of work, Stephanie is dedicated to service through volunteerism and entrepreneurship. Most recent activities include serving as a National Trustee, Boys and Girls Clubs of America Northeast, Board Director for Cambridge College, Member Mass Business Alliance for Education Advisory Council, Council member for Pine Manor College, and she’s a former Director of the Girl Scouts of Eastern Massachusetts Executive Board and a 2016 Leading Women Award recipient. Stephanie is also a member of The Boston Club, National Organizations of Links, Inc. Boston Chapter, and Circle-Lets, Inc. Boston Chapter where she is its National President.

Daniela Rus is the Andrew (1956) and Erna Viterbi Professor of Electrical Engineering and Computer Science and Director of the Computer Science and Artificial Intelligence Laboratory (CSAIL) at MIT. Rus’s research interests are in robotics, mobile computing, and data science. Rus is a Class of 2002 MacArthur Fellow, a fellow of ACM, AAAI and IEEE, and a member of the National Academy of Engineering, and the American Academy for Arts and Science. She earned her PhD in Computer Science from Cornell University.

Daniela heads the Distributed Robotics Laboratory at MIT CSAIL. This lab works to develop networked, distributed, collaborative robots that can self-configure and reconfigure themselves to address challenges in the physical environment that cannot be foreseen and, thus, cannot be addressed in pre-programmed software. The work of the lab encompasses a wide array of technologies, including robotic design, AI/machine learning, distributed algorithms, mobile computing. Daniela’s work is enabling new applications in a variety of industries, from healthcare to manufacturing.

We invite you to meet our honorary award recipients at our Leadership Awards Celebration on November 6th at Fenway Park.