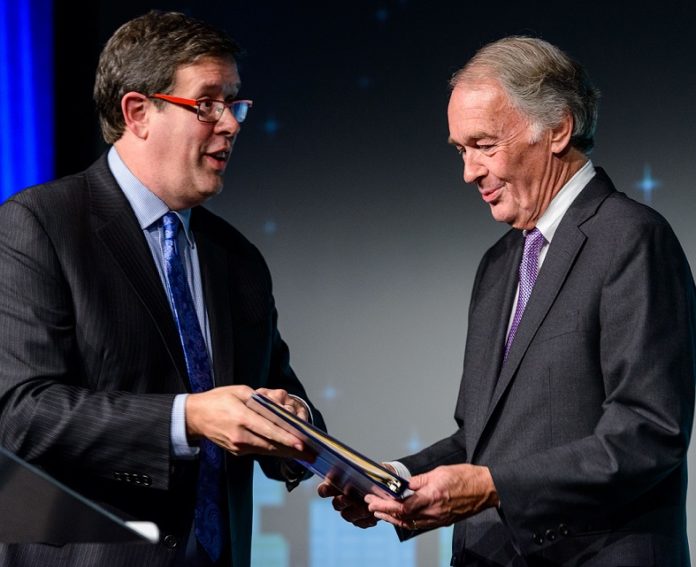 A thriving innovation ecosystem demands collaboration among industry, education and government to ensure ideas are cultivated, skilled talent is developed, and the legal/regulatory frameworks are keeping pace with an evolving landscape.

As the largest technology association in the region, MassTLC plays a unique role by working with our member companies, leaders in education, and public officials to foster the economic conditions for companies to thrive, and to help ensure the state’s legal and regulatory frameworks to keep pace with innovation.

As we prepare for the year ahead, let’s take a moment to reflect on our work both at the federal and state level in the year gone by. Keep an eye on our policy page for the latest policy updates.

Immigration
The Massachusetts tech community values the contributions of immigrants as innovators and job creators. When President Trump issued an Executive Order to restrict travel to the U.S., it had an profound impact on the Massachusetts economy. MassTLC took immediate action, commissioning a report on The Economic Impact of Immigrants on the U.S. and filing seven amicus briefs, including two in the U.S. Supreme Court, to ensure that the judiciary understood what was at stake when they considered whether the Travel Ban violates U.S. immigration law or the Establishment Clause of the U.S. Constitution.

MassTLC was disappointed with the United States Supreme Court’s 5-4 decision in the Trump v Hawaii “Travel Ban” case, and believe it was wrongly decided both as a matter of law and policy. Both Justice Sonia Sotomayor, joined by Justice Ruth Bader Ginsburg, and Justice Stephen Breyer, joined by Justice Elena Kagan, penned scathing dissenting opinions that cited MassTLC’s amicus brief as evidence of the bad policy.

Having reached this point with the Supreme Court, however, we turn our attention to Congress to change the law. Congress has the power to create a sensible legal framework that would allow Massachusetts to benefit from the next Steve Jobs, whose father was an immigrant from Syria, a country targeted by the President’s ban. We encourage those who are concerned about the direction of our immigration policy to contact their representatives in Congress and express your opinions.

MassTLC will continue to champion the important role that immigrants play in the tech economy.

Tariffs
MassTLC urged Congress to roll back the tariffs on Chinese imports and find a solution that advances our shared goal of changing China’s harmful trade practices, asserting that the tariffs and the continued gamesmanship over trade are creating irreparable harm to America’s tech companies. Along with CompTIA and other regional tech associations across the country, we urged Congress to find a solution that reverses the tariffs before they cause any more harm to our economy and U.S. competitiveness around the world.

We acknowledge that our trade agreements need to be updated and China needs to be held accountable for its unfair and illegal practices, but rather than imposing tariffs that punish American companies, workers, and consumers, we contend that the U.S. should develop a sensible negotiating strategy that can more effectively address the longstanding trade challenges with China.

Net Neutrality
The Commonwealth is among those states that are leading the global transition into a digital age. This leadership is built upon the level playing field created by an open Internet. The lack of a federal policy resulting from the FCC’s 2017 ruling sets the stage for individual states to implement their own net neutrality regulations, resulting in a patch work of confusing and difficult to enforce laws. MassTLC and over three dozen of its member executives came together in 2018 to urge Congress to support Federal Net Neutrality.

Furthermore, MassTLC called on Congress “to intervene by putting forth federal legislation that will remediate the issues left by the FCC ruling and avoid a patchwork of conflicting new net neutrality laws passed by individual states.” We called on Congress to act on behalf of the tech industry by codifying into legislation a set of national standards in which blocking, throttling and anti-competitive behavior will be prohibited, and will continue to champion the cause once the new Congress is sworn in.

We will continue our work with our Congressional delegation in 2019.

Cybersecurity
MassTLC led a delegation of technology leaders to Washington in mid-February as part of our annual DC Fly-In and cybersecurity was one of the key policy issues we discussed. During that trip, CyberMA, powered by MassTLC, partnered with the national CyberUSA and regional CyberOregon groups to host a Cyber-Policy briefing. The briefing, led by the U.S. Department of Homeland Security and other federal experts, delved into current and proposed policies affecting cybersecurity at the federal level.

Back home, MassTLC informed state lawmakers that the tech industry strongly favors a single national standard for regulating Internet Service Providers and opposes a patchwork of differing state laws that will shift ISP resources from innovation and value creation to compliance and regulatory burden. However, in the absence of an FCC regulation on internet privacy, we support state-level policies that attempt to restore the balance of innovation and consumer protection that is needed for the growth, adoption and public confidence in our technology economy.

Privacy and security will be top concerns on our agenda in 2019 at both the state and federal levels, including soon to be seen outcomes of GDPR as well as state efforts across the US to enforce data rights.

IP/Patents
To maintain our leadership position as an innovation state, we must continually seek to provide protections for startup and growth companies to have the opportunity to thrive and prosper in Massachusetts. MassTLC supported language included in Senate bill 2625, An Act Relative to economic development in the Commonwealth, as it relates to enforcing a ban on making bad faith assertions of patent infringement. These protections are needed to safeguard entrepreneurs in Massachusetts from costly lawsuits from “patent trolls” that may result in them losing their businesses, hampering not only them as individuals in the state, but the opportunity for Massachusetts to continue to grow and thrive as an innovation hub.

Tech Apprenticeships
A key item on the agenda for the MA delegation at the DC Fly-In was continuing to build support for the CHANCE in Tech Act, a bipartisan bill that seeks to address the growing skills gap in the technology sector through expanding and investing in tech apprenticeship programs. MassTLC first introduced the CHANCE in Tech bill to Congressman Moulton and other members of our Congressional Delegation a year ago during our 2017 Fly-In and the Congressman announced his sponsorship at a MassTLC roundtable in 2018 at member company EBSCO Information Services in his district. We championed the House bill and a companion bill in the Senate, and, within hours of our meeting, Senator Markey agreed to join the bipartisan, bicameral effort.

MassTLC has also been working at the state level with our sister group, the Washington Tech and Information Association (WTIA), the Governor’s Skills Cabinet, and the One8 Foundation to bring a U.S. Department of Labor funded tech apprenticeship program, called Apprenti, to Massachusetts. Several MassTLC members, including Wayfair, PTC, Cengage, and Carbon Black have signed on to host members of the first cohort in 2019.

Finally, MassTLC launched MassTalent in 2018 as a platform for tech companies to navigate the myriad of organizations providing critical training, placement, and funding for workforce development. MassTLC will continue to promote Apprenti and support alternative talent pipeline models and diversity initiatives in 2019.

MassTLC will continue to advocate for policies that help prepare our workforce for the jobs of the future. We join our colleagues at the MA Business Alliance for Education (MBAE) in calling on lawmakers to not write a blank check for education, but rather to set specific, higher improvement targets, particularly to serve our most disadvantaged students, and implement reforms that close the racial and socio economic achievement gaps and workforce skills gaps that threaten the economic and social health of the state.

Diversity & Inclusion
As co-chair of the TechHub Caucus Working Group—working alongside Verizon New England President, Donna Cupelo—Tom Hopcroft noted in his remarks during a State House Innovation Day that bringing the tech community into the State House is “a critical step in forming relationships, educating our lawmakers, and shining a spotlight on how these innovators and innovations are fueling much of the Commonwealth’s economic growth.”

MassTLC’s Tech Pulse report, which surveyed over 150 MA tech CEOs, found that the quality of the talent pool is the number one reason companies choose to locate in Massachusetts, but that an inability to hire enough skilled talent is the number one constraint to growth. MassTLC’s State of the Tech Economy research shows that the tech sector is 71% white and 3/4 of those are male, and that progress was not happening at an acceptable rate. To reach today’s participation level of white males, with no intervention, it would take the Latino community until 2046, women until 2071, and African Americans until 2086.

MassTLC continues to advocate that industry and lawmakers do more to reach women and communities of color such that everyone can have the opportunity to participate in an economy that pays twice the state average. This is not just a question of fairness and equity, but an economic imperative given that for every person that is not hired here to fill a role, tech companies will hire for the role elsewhere, taking a critical job plus 2-3 support jobs out of state.

For the past five years, MassTLC has been working to inspire and support young women through a mobile app competition and mentoring for middle and high school girls. In 2019, we debut our Board-Ready Bootcamp aimed at helping tech companies bring more diversity to their boards.

Robotics/IoT
MassTLC has been convening and supporting the robotics and IoT communities in Massachusetts for well over a decade. A few years ago, MassTLC helped facilitate the creation of MassRobotics, a robotics innovation hub. In 2018 we urged the Legislature to establish a quasi-public robotics center or further invest in the existing MassRobotics as a critical element to protect our region’s leadership position in this emerging economic cluster. MassTLC applauded Governor Baker’s announcement of a $2.5 million MassWorks grant to the City of Boston directed to help MassRobotics expand its operations.

Innovation & the Future
Finally, as we reflect on the year gone by, the MassTLC team continues to be proud of the leadership role held by Massachusetts in the world. We remain optimistic about our future, however, we cannot take our position for granted and fail to implement policies and strategies to maintain our role as the nation’s innovation leader.

We do not need to look far to see how other global leaders are bringing opportunity and growth to their regions, not just through innovative technology, but a holistic approach to inclusion, resulting in vibrant ecosystems.

In the years ahead, MassTLC will continue to advocate and champion forward-looking policies that support the strength and leadership of our tech economy on a state, national and global level.