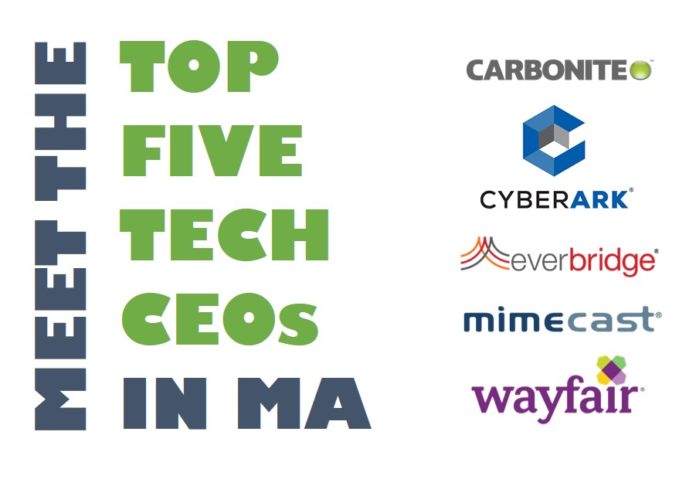 These five technology CEOs are driving success, not only for their companies, but for the tech sector in Massachusetts. They are a Who’s Who of the local tech scene and a must-know for those well-connected in the ecosystem.

Through a robust open nomination and peer review process, these top five tech CEOs were selected to be honored as finalists at the Mass Technology Leadership Council Awards gala on Thursday, September 14, 2017, in the World Trade Center Boston. They are being recognized for demonstrating significant leadership resulting in the success of their company, employees and the community, while promoting a diverse and inclusive culture. The top CEO will receive the CEO of the Year Award at the Gala.

The 2017 Top Five Tech CEOs, each a finalist for CEO of the Year, include:

Mohamad leads with transparency and an emphasis on values-based programs for his employees. He recognizes the importance of diversity in the workplace and is dedicated to championing diversity within his organization. He is involved in a number of initiatives that focus on providing more opportunities for highly-skilled underrepresented populations. Over the past year, he has taken a stand in support of immigration, defended the need for net neutrality and has sounded the alarm against rising cyber threats.

From the beginning, Peter has stayed aligned with his core values and encourages his team to have the same: authenticity, ownership, and good humor. Peter and his team are committed to employee development that provides upward mobility to employees as they build skills and demonstrate capabilities. Mimecast celebrated the one-year anniversary of its IPO this past November, which was a year of exciting growth and expansion.

Jaime builds and empowers the some of the best teams in the area, and has sustained a culture committed to winning. He led Everbridge through one of the most successful tech IPOs of 2016. The company’s team-first approach – led by Jaime and the leadership team – has been critical in establishing a strong company culture during a period of remarkable company growth and transition. Jamie regularly updates all employees on details related to the company’s growth, vision, and execution.

Udi helped to implement a new CEO Roundtable program in which he meets with employees in a small, intimate setting allowing them to ask questions, hear what’s on his mind, learn about current company initiatives and deepen relationships with fellow colleagues. Udi feels strongly about the value of emphasizing diversity and ensuring employees are given every opportunity to excel. He puts a premium on creating opportunities for career development and investing in the community.

Niraj has created an entrepreneurial culture through a dedication to transparency and collaboration since the company’s inception in 2002. This mentality is so ingrained in the organization that the office embraces a completely open office layout. Under Niraj’s guidance, Wayfair has implemented a number of initiatives designed to promote diversity and inclusion in the workplace, like Wayfair’s Women@Work, Learn@Work and the Wayfair Labs program.

Reserve your table/seat for the Awards Gala on Thursday, September 14, 2017, at the World Trade Center Boston. Details and registration.

Reflections on a Year of Perseverance and Community