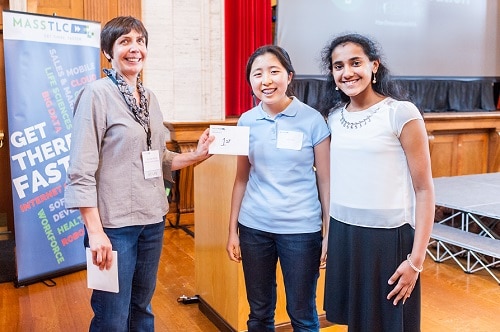 Technovation is an international program that teaches mobile app development, entrepreneurship, and community engagement to middle and high school girls. The MassTLC Education Foundation runs the local, regional competition round, which last year saw over 40 teams finish and participate in the regional showcase at Wentworth Institute of Technology. Three senior division teams and two junior division teams from Massachusetts went on to represent Massachusetts in the global semi-finals.

What’s it like to compete as a student in the Technovation challenge? Local student Sruthi Kurada shared her experience.

How did you learn about Technovation and why did you decide to participate?

I learned about Technovation through my school’s Technovation Club. I decided to participate in the competition, because I already had a programming project that I had been working on and wanted to share. Technovation provided a great outlet to share this work, as well as, helped me sharpen my business idea presentation skills.

How did you come up with the idea?

I came up with the idea with my teammates during a robotics competition. We were participating in First Lego League and the topic of the year was Animal Allies. We had all been reading in the news about the massive amounts of bees dying every year and wanted to help solve this problem. We quickly learned that research on this had been going on for many decades, and we could not make additional progress on this in just a couple of months. So we changed our idea to help beekeepers through better note taking, as that will help them and scientists to recognize the patterns and figure out the underlying issues.

Tell us about your project

CCD, or colony collapse disorder, is a significant disease that affects bees. We created an android app, which will enable beekeepers to write the observations about their hives in a consistent format. Our app also allows users to connect a Raspberry Pi to our system and will let sensors attached to Raspberry Pi to input environmental data. The Raspberry Pi can help beekeepers to automatically input environmental sensor data, saving time and providing greater accuracy.

How did you divide up the work?

We divided up the work of the project by each choosing one aspect of the competition, such as the coding or the business aspect, and then working together to complete those two sections. When either of us ran into a problem, we tried switching our roles or working on the same issue together to overcome it.

What was the most challenging and satisfying parts of the competition?

The most satisfying part of the competition for me was the coding, because this was my first big Android app that I had coded entirely from scratch. It was frustrating at times trying to get the code to work, but incredibly fulfilling once finished.

The most challenging part was the pitch, because I did not know how to design a presentation nicely and create a good speech. My mentor (my brother) helped me on this.

Did you learn any new skills from doing Technovation?

Yes, I learned a lot of skills from Technovation. The first and most important was learning how to make a pitch deck and speech that was easy to follow. We learned to reach out to the community by visiting local beekeeper organizations. We also learned a lot about coding Android apps and publishing to the Google Play Store.

What did you get out of the experience and how do you think it will affect your future?

I learned to move from my tunnel vision of getting a specific task done a particular way to  being able to work better together in a team. When one approach didn’t work, for example, through making lists of assigned duties, we moved to a plan where we did some tasks together or gave the work to the other person to complete.

Would you recommend Technovation to other girls?

I would recommend Technovation to other girls who are interested in STEM fields, because it is an excellent program that puts together both the aspects of a business, which is the pitch, as well as technical aspects, which is the app. Anyone who wants to learn a lot about both of these things should check Technovation out.

Learn more about Technovation and the MassTLC Ed Foundation:

Registration for the 2018 Technovation Challenge is open. Learn more.

You can learn more about Sruthi and team’s project, HiveSwarm, by following the links, below