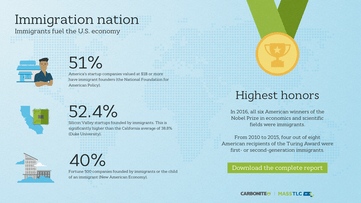 BOSTON, MA–(Marketwired – Jun 6, 2017) – The Massachusetts Technology Leadership Council (MassTLC), the region’s largest non-partisan, non-profit technology industry association, today released a comprehensive report documenting, from a business perspective, the impact of immigrants on our economy. The report, Economic Impact of Immigration on the U.S. Economy, underscores how global mobility of talent and ideas into the United States has been a critical driver of the country’s innovation capacity, economic growth and competitiveness.

As a leading technology state, the impact of immigration on innovation and job creation is disproportionately felt in Massachusetts. MassTLC joined the national conversation on immigration with the submission of amicus (“friend of the court”) briefs in the District Court of Hawaii and the U.S. Courts of Appeal for the 4th and 9th Circuits. The report expands on the data referenced in the briefs and highlights a rich tapestry of unique impacts across America with credible, well sourced, information.

“Immigrants are vital to the technology industry and overall U.S. economy and as a nation we have benefited greatly from their innovation, leadership and job creation,” said Steve Kaufer, President and CEO, TripAdvisor. “At TripAdvisor, one of our core values is that we are ‘better together’ and for us, that means being able to hire the best from anywhere around the world.”

“Massachusetts and the United States have long enjoyed overwhelming economic benefits from the influx of highly skilled and motivated immigrants who have flocked to our country to create and fill the jobs that move our nation forward as the world’s foremost economic power,” said Tom Hopcroft, President and CEO of MassTLC. “Lately, however, America has been losing the talent war as other nations — recognizing an opportunity — have become more welcoming to foreign innovators and job creators. Our hope is that this report contributes to a productive dialogue about the vital role of immigrants and diversity of ideas in our communities.”

“For generations, immigrants have been at the core of the American economy,” said Mohamad Ali, CEO of Carbonite. “I’ve witnessed firsthand how immigrants can improve economic growth, job creation and innovation within our communities. As an immigrant myself, I deeply understand the opportunities this great nation provides, and as the CEO of a thriving company, I’m committed to encouraging diverse thoughts, experiences and backgrounds to make us stronger and more successful.”

To download a full copy of Economic Impact of Immigration on the U.S. Economy: Contributions of Recent Immigrants, please visit https://www.masstlc.org/immigration/

About the Mass Technology Leadership Council, Inc.
The Mass Technology Leadership Council (MassTLC) is the region’s leading technology association and the premier network for tech executives, entrepreneurs, investors and policy leaders. As the voice of the Massachusetts tech sector, representing nearly 300,000 employees and more than $37B in total payroll, MassTLC drive progress by connecting people from across the innovation ecosystem, providing access to industry-leading content and ideas, and offering a platform for visibility for member companies and their interests. More at www.masstlc.org.

This release also appears on MarketWired.