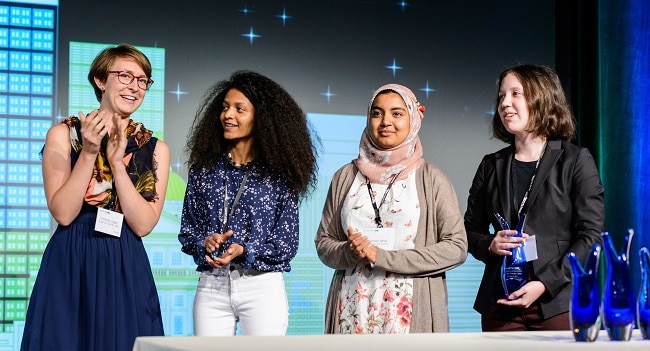 Nuance is a proud corporate partner of Technovation, a global technology education non-profit that empowers girls to become leaders, creators, and problem solvers. Every year, girls team up to solve real-word problems in their communities by developing coding skills and building a mobile app.

Two of Nuance’s employees, Karima Kanji-Tajdin (Nuance Mix Conversational AI Advocate) and Lauren Beltrone (Senior Conversation Experience Designer), hosted a workshop at this year’s summit. The workshop, “Build Your Own Project Management Bot (with Nuance),” taught participants how to build an agenda-planning bot from scratch. Karima and Lauren made sure everyone left with one take-away: no matter your technical background, you, too, can create your own custom chatbot. The workshop was a big success! Karima and Lauren’s passion for technology and eagerness to give back to girls in STEM made it extra memorable.

As they prepared for the workshop, Karima and Lauren realized they had something in common: fond childhood memories of talking to computers. Karima remembers teaching her Commodore how to speak in the 1980s, and Lauren remembers watching Word transcribe her short stories in the 1990s. They reflected on how these magical moments influenced them; Karima went on to study voice signal processing and Lauren studied speech perception. Eventually, they both found their calling at Nuance!

And that’s exactly why they love Technovation—it brings these magical moments to girls all over the world. Technovation believes that everyone should have access to coding education, regardless of where you live, what your gender is, or how old you are. During their 12-week program, girls identify a real-world problem, create a solution using code, and build a business plan to market it.

The Build Your Own Project Management Bot (with Nuance) showed the audience how to plan, build, and deploy an agenda bot to keep track of the Technovation calendar. The bot elegantly handled intent switching and fringe cases, and it even had visual elements like image carousels. It was very well received, and there was lots of engagement with the Technovation girls. At the end of the workshop, they encouraged attendees to join Mix and try the bot out for themselves. You can download the Technovation bot files and try it out, too. Learn more about Technovation here and their amazing cause!