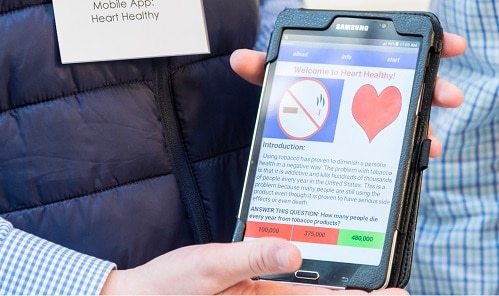 On December 4th, participants in the annual Congressional App Challenge (CAC) gathered at the Massachusetts State House to share their projects. The Congressional App Challenge (CAC) is a congressional initiative that seeks to encourage student engagement in coding and computer science through local app challenges hosted by Members of Congress. This year, over 165 Members of Congress signed up to participate, including Massachusetts reps Jim McGovern, Joe Kennedy, Katherine Clark, Seth Moulton, and William Keating.

The CAC aims to bridge the gender, geographic, and racial gaps in tech. In its first two years, the program yielded 239 challenges across 33 states. Over 1,150 apps were created by nearly 4,000 students, and participant demographics surpassed all industry diversity metrics, with young women representing 30% of all competitors.

This year Massachusetts fielded 42 teams across five congressional districts. About a dozen of these teams attended the State House event where they mingled with representatives from the congressional offices, judges, members of industry, and school officials.

Pembroke High School had a large number of participants in the challenge due to its strong computer science (CS) curriculum. A number of the teams, including the MA congressional district 9 winners, Matthew Nugent, James Milinazzo, and Michael Teevens, are in a CS independent study, CS Principles. This class focuses on CAC in the fall and Java development in the spring. The students have the opportunity to become Certified Java Developers as part of the course.

Pembroke CS and robotics teacher, Elaine Griggs, wants to encourage more girls to participate in the CS courses available. She has an ally in Caleigh Judson, one of the few girls in Elaine’s class. Caleigh has plans to visit the middle school to encourage girls to pursue CS in high school. As Caleigh says, “Girls are really blind to CS. They don’t know how cool it is.”

Kriti Dhiman, a freshman at Newton South, is one girl who does not need encouragement. She developed her clean water app as part of an entrepreneurship class at TiE Boston and decided to continue refining her app as part of CAC. She develops apps for fun and has participated in a competition through ProjectCSGIRLS.

The State House celebration ended with remarks from Tom Hopcroft of MassTLC, Rachel Decoste of CAC, and representatives from the Congressmembers’ staffs, followed by a tour for the students.

See a list of winners from across the country and view their project demo videos.