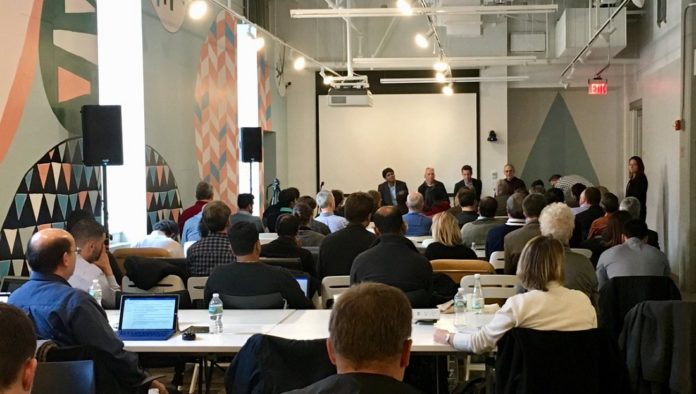 The MassTLC IoT and Robotics communities teamed to host a day of presentations and discussion around the convergence and collision of their technologies.

The Intersection of IoT and Robotics: How Sensors, Data, and Intelligence Are Redefining Industry sponsored by ForgeRock, MathWorks, Fitbit, iRobot, Teradyne/Universal Robotics, and Verizon, attracted close to 150 senior leaders, experts, engineers and integrators at the Alley, powered by Verizon in Harvard Square.

Lisa Seacat DeLuca, Distinguished Engineer, IBM’s Watson IoT, kicked off the session with several case studies depicting her vision for the connected world from saving wildlife to managing your home lighting. And her thoughts of where the biggest innovations will happen: voice technology. View Lisa’s presentation.

A series of tech talks provided enlightening use case examples of technologies redefining traditional industries.  Abbas Bagasra, from TrueStar discussed smart agriculture, tying sensors and data together to provide decision making tools to farmers to save costs as well as crops.  Ted Plummer, from Fitbit showed how wearables can connect and monitor a variety of medical data. View Abbas’s presentation.

Lily Lim from Finnegan discussed data privacy, ownership and ethics, providing examples for recent cases and potential scenarios and Ben Goodman of ForgeRock discussed the importance of cyber security and the role it plays with these connected devices. View Lily’s and Ben’s presentations.

The Smart Cities: Thinking Outside the Box panel, moderated by Setrag Khoshafian of Pegasystems included panelists: Ed Bernardon of Siemens PLM Software; Kris Carter of the Mayor’s Office of New Urban Mechanics; and Subu Ramasamy of Philips Lighting.  The panel discussed connecting physical objects, from vehicles to lighting and telephone poles, and the more accessible data due to the lower costs of sensors and increased computing power. They spoke about the future of smart cities and how it will affect our city living and working as well as challenges in implementing some of the newer technologies.  View the smart cities presentation.

The How IoT and Robotics are Redefining Manufacturing panel, moderated by manufacturing expert Peter Russo of MassMEP brought together a diverse group of panelists including: Pulkit Kapur of MathWorks; Yavor Kolarov of OSRAM; Rony Kubat of Tulip; and Walter Vahey of Teradyne. This panel had a candid conversation about manufacturers entering a new era where robotics and IoT are essential to remain competitive. They discussed how connected devices and collaborative robots are converging to escalate productivity, helping their customers and their bottom line.

The closing keynote, Colin Angle, Chairman, CEO and Co-founder of iRobot spoke about mainstreaming robotics and IoT in the home and the future of the “connected home”.

Hype vs Reality: What’s Happening with IIOT in Manufacturing?