BOSTON – March 20, 2018 – In 2017 Sigfox U.S.A., the North America network operator for the global Low Power Wide Area Network (LPWAN) connectivity provider Sigfox, focused its growth strategy on densifying the network in key regional markets and expanding its partner ecosystem. With this strategy, Sigfox U.S.A. achieved over a 50 percent increase in coverage, and a 45 percent increase in its partner ecosystem. In just two years since entering the market, Sigfox U.S.A. has coverage in 24 out of the 25 top metropolitan markets including 25 percent of the United States population.

Sigfox U.S.A. had many noteable network achievements in 2017 including: 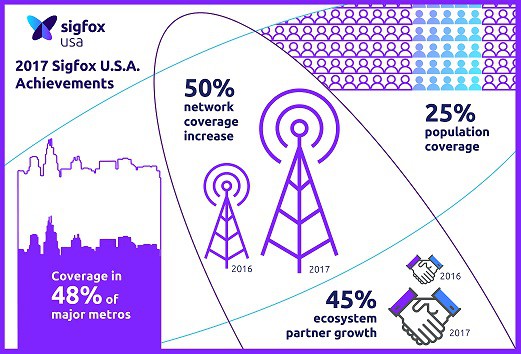 In 2018, Sigfox U.S.A. will continue to extend and densify its network, with a focus on key regions, including greater Chicagoland, Seattle metro, Las Vegas, New York City to Boston corridor, and the greater San Francisco Bay-area.

“We’re excited by our accomplishments in 2017, and are looking ahead with a focus on steadily deploying our network, while driving specific use cases within key regional markets,” said Christian Olivier, President, Sigfox U.S.A. “We’ll concentrate on areas where we can provide low cost, energy efficient connectivity to a wide range of assets, such as asset monitoring, asset tracking, and facilities management.”

To better serve the needs of the U.S. market, Sigfox U.S.A. focused on the expansion of its ecosystem partnerships, driving 45 percent growth over last year. Partners span across semiconductors, devices, device design houses, platforms, and system integrators bring IoT solutions to end customers in the U.S. Sigfox U.S.A. with its ecosystem of partners, successfully completed pilots across many use cases including:

“The quality and efficiency of Sigfox network allows OUTFRONT Media to remotely monitor the functionality of lighting systems on our billboards in the U.S.,” said Pete Izzo, SVP Wireless Services at OUTFRONT Media. “We’ve installed light sensors on our billboards in San Diego and Los Angeles, which alerts our operations team to outages and allows us to keep inspection costs down while delivering a better quality product to our advertising customers.”

According to Gartner[1], low-power, wide-area networks are one of the ten IoT technologies that “will enable organizations to unlock the full potential of the IoT” through 2018. “Traditional cellular networks don’t deliver a good combination of technical features and operational cost for those IoT applications that need wide-area coverage combined with relatively low bandwidth, good battery life, low hardware and operating cost, and high connection density. The long-term goal of a wide-area IoT network is to deliver data rates from hundreds of bits per second (bps) to tens of kilobits per second (kbps) with nationwide coverage, a battery life of up to 10 years, an endpoint hardware cost of around $5, and support for hundreds of thousands of devices connected to a base station or its equivalent.”

Sigfox is the world’s leading provider of connectivity for the Internet of Things (IoT). The company has built a global network to connect billions of devices to the Internet while consuming as little energy as possible, as simply as possible. Sigfox’s unique approach to device-to-cloud communications addresses the three greatest barriers to global IoT adoption: cost, energy consumption, and global scalability.

Today, the network is present in 45 countries and on track to cover 60 by 2018. With millions of objects connected and a rapidly growing partner ecosystem, Sigfox empowers companies to move their business model towards more digital services. Founded in 2010 by Ludovic Le Moan and Christophe Fourtet, the company is headquartered in Labège near Toulouse, France’s “IoT Valley”. Sigfox also has offices in Paris, Madrid, Munich, Boston, San Francisco, Dubai, Singapore, Sao Paulo and Tokyo.

Newmine Recognized as a 2019 Gartner Cool Vendor in Supply Chain...

Newmine Recognized as a 2019 Gartner Cool Vendor in Supply Chain...