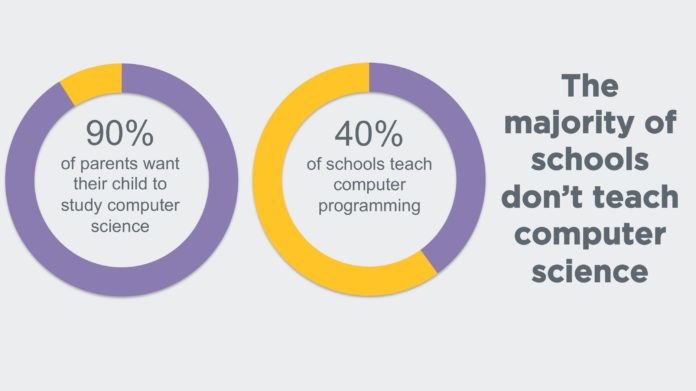 On Tuesday, June 27th, I testified on Beacon Hill before the Joint Committee on Education in support of House Bill 2878, An Act Relative to Coding and Computer Science in Schools, sponsored by Representative Jeffrey Roy. The bill seeks to amend our education standards to insert after the words “science and technology” the words “computer science and computational thinking, including computer coding.” See the text of my testimony.

MassTLC believes that computational thinking, computer science and coding are fundamental skills that should be made available to every student in Massachusetts.

At the beginning of the decade, MassTLC set a goal to create 100,000 new tech sector jobs in Massachusetts by the year 2020. We learned early on that creating the jobs is not a problem. The challenge is filling them. Companies come to Massachusetts because we have some of the best talent in the world – we just don’t have enough of it. Massachusetts companies are opening offices and shipping jobs around the globe to access the talent they need to fuel their growth. This represents a lost opportunity for employment and revenue in the state.

According to a survey we commissioned with over 150 senior executives, 96% reported that access to a talented workforce is an advantage of doing business in Massachusetts. However, 72% responded that the availability of skilled workers was a challenge to doing business in the state.  According to Burning Glass Technologies, there are over 23,000 open tech jobs in Massachusetts today, and the Massachusetts Department of Higher Education reports that there are 17 jobs for every graduate with a Bachelor’s degree (6 for every Associate’s degree) in the Commonwealth. Tech jobs are good jobs that exist in every industry and pay about twice the state average.

Our economic growth and vitality are being constrained by our inability to fill jobs that increasingly involve computational thinking. Our young people are stunted in their ability to reach their full potential because they lack the fundamental tools needed to succeed in today’s world. Coding and computer science are fundamental skills that young people need to get ahead in their careers today and be successful in the jobs of tomorrow.

I urge you to support this bill as well. Please make a call or send a letter of support. We’ve made it simple with our online legislative tools. Simply fill out the form below and it will tee up a draft model letter with key language (that you can edit or cancel at any time) addressed to your lawmakers for easy sending. Or you can send it yourself to Education Committee Co-Chairwomen Senator Sonia Chang-Diaz (Sonia.Chang-Diaz@masenate.gov) and Representative Alice Hanlon Peisch (Alice.Peisch@mahouse.gov), with a copy to bill sponsor Rep Jeffrey Roy (Jeffrey.Roy@mahouse.gov) and MassTLC policy lead Sara Fraim (sara@masstlc.org).

Please join us in taking action on this important issue. Thank you.