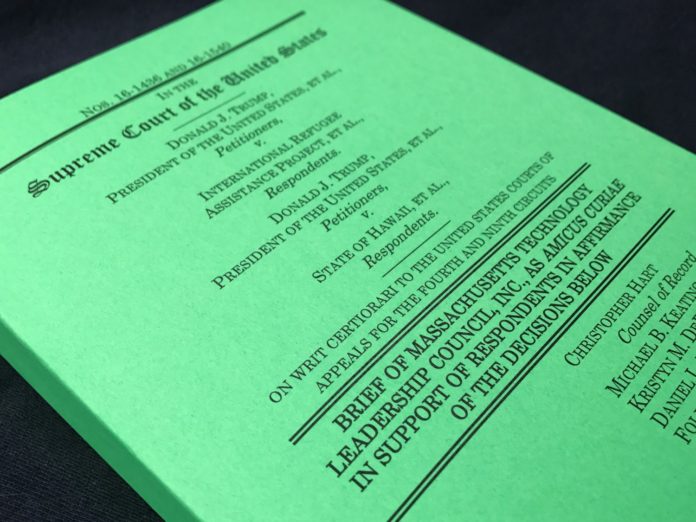 MassTLC is very disappointed with the United States Supreme Court’s decision in the Trump v Hawaii “Travel Ban” case. We believe it was wrongly decided both as a matter of law and policy.

In a 5-4 split decision authored by Chief Justice John Roberts, Jr., and joined by Justices Anthony Kennedy, Clarence Thomas, Samuel Alito, and Neil Gorsuch, the U.S. Supreme Court held that the President acted within his statutory authority to ban people from predominantly Muslim countries from entry into the U.S., despite clear evidence of his animus toward Muslims.

Justice Sonia Sotomayor, joined by Justice Ruth Bader Ginsburg, delivered a scathing dissent where she accused the majority of “ignoring the facts, misconstruing our legal precedent and turning a blind eye to the pain and suffering the proclamation inflicts upon countless families and individuals, many of whom are United States citizens.” She contends that “an injunction is in the public interest,” and, citing MassTLC’s amicus brief, noted that “the Proclamation has deleterious effects on … the Nation’s technology industry and overall economy.”

Justices Stephen Breyer, joined by Justice Elena Kagan, also cited MassTLC’s brief, and noted that “given the importance of the decision in this case, the need for assurance that the Proclamation does not rest upon a ‘Muslim ban,’ and the assistance in deciding the issue that answers to the ‘exemption and waiver’ questions may provide, I would send this case back to the District Court for further proceedings. And, I would leave the injunction in effect while the matter is litigated. Regardless, the Court’s decision today leaves the District Court free to explore these issues on remand.”

Having reached this point with the Supreme Court, we must now look to Congress to change the law. Congress has the power to create a sensible legal framework that would allow Massachusetts to benefit from the next Steve Jobs, whose father was an immigrant from Syria, a country targeted by the President’s ban.

Congress can make it clear that the United States values immigrants from all countries, whether they are coming for jobs in the tech sector or to flee violence in their home countries. Congress is faced with a host of immigration crises – crises solely of the Administration’s making – that it has the ability to resolve.

As MassTLC’s research and advocacy have demonstrated, banning entire classes of immigrants will harm not only the tech sector, but our overall economy. Congress has the power to change this, and I encourage anyone who is concerned about the direction of our immigration laws to contact their representatives in Congress and express their opinions at the ballot box in November.