According to the National Women’s Business Council, women-owned businesses account for 36% of all privately-held, nonfarm companies in the U.S., up 27% from 2007. These statistics are positive and encouraging; however, it is commonly known that women lag behind men in the number of tech startups created and key technical roles held in companies. With technology being such an important driver of our economy, it is essential that we close the gender gap and boost the number of women starting tech companies and occupying critical technical jobs across industries.

How do we increase women’s participation in STEM so that more women want to establish tech startups, hold top technology roles, and take on leadership positions?

We can start by exposing girls to technology and the concept of entrepreneurship at a young age. One way we can do that is by encouraging them to participate in the Technovation Challenge, the world’s largest technology entrepreneurship programs for girls 10-18. The program teaches mobile app development, entrepreneurship and community engagement. The curriculum is online and free to everyone, and no experience is needed.

During a 12- or 20-week program, girls start by identifying a problem in their local community. They work in teams with female industry mentors to develop a mobile app and create a business plan to launch a company. The app must address a real-world problem aligned with one of the six Technovation themes of the UN Sustainable Development Goals: peace, equality, poverty, environment, education and health. 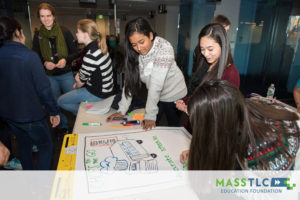 At the completion of the program, teams submit their app, a business plan (senior division only) and a demo video to be judged by Technovation. Each year awards are given to top teams in each Sustainable Development Track. The program concludes at the World Pitch Summit in Silicon Valley in August when finalists from around the world come together to celebrate their accomplishments and attend workshops, network, visit tech companies and pitch their businesses in a live competition.

Now in its seventh year, Technovation has reached over 10,000 girls globally in middle and high school, many of whom had no computer science experience before starting the program. The program has positively impacted young women in significant ways. According to the organization, after participating in Technovation:

Importantly, this interest translates into a higher percentage of young women deciding to m 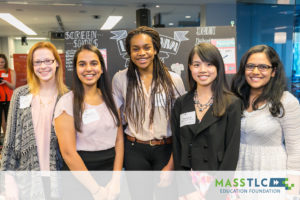 It is also striking to see the wide variety of apps being developed. For example, apps have been created for animal and plant health; garbage and recycling; and concussion detection. And while coding is an important component of the challenge, Technovation reports that some of the best apps are selected based on “their potential social impact, exceptional creativity, and great presentation.”

I spoke with Rachel Nicoll, Project Manager at MassTLC Education Foundation, about their involvement in Technovation. The Massachusetts Ed Foundation focuses on computer science education and building pathways to technology careers, particularly for underrepresented groups.

Rachel told me that Technovation was started in Massachusetts in 2012 by two teachers, also the co-chairs of the Greater Boston CSTA chapter (Computer Science Teachers Association), from the Advanced Math & Science Academy Charter School in Marlborough, MA. An important part of the Technovation program is its industry mentors, who offer both guidance and inspiration to the girls on the teams. These two teachers came to the MassTLC Ed Foundation in 2014 and asked for assistance with finding industry mentors. The Foundation decided to get involved and through Technovation it is actively engaged in educating female tech entrepreneurs.

Rachel shared this about Technovation: “The program addresses a number of issues for the tech community and its talent pipeline including support for underrepresented groups in tech, more tech education in schools, and more female entrepreneurs. These issues are important to the MassTLC membership and Technovation is a great way for the membership to get directly involved in addressing these issues of inclusion.”

Rachel sees girls greatly benefiting from the program. She explained, “This type of experiential learning exposes them to entirely new skills and concepts they might not encounter otherwise, including teamwork and accountability. By engaging in and completing these new tasks, their confidence builds, not only in these areas, but removes inhibitions towards other new concepts.”

Girls who have participated in the program truly enjoy and understand the benefits from being part of Technovation.

“I would totally recommend Technovation to other girls. It gives you an experience like no other before it and gives you a great opportunity to go deeper in coding.” – Student from Massachusetts

“You don’t know what you’re good at until you try it!” – Student from Massachusetts

Watch this two-minute video created by MassTLC Ed Foundation to hear what girls think about the program. It is a powerful example of how Technovation empowers girls to explore and embrace tech entrepreneurship.

Ready to Join a Team? 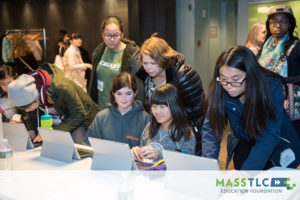 Here are some important points to know if you are interested in being part of a team:

Visit the FAQ session of the website to get answers to your questions.

Through the Technovation Challenge, girls not only acquire technology, coding and business skills, they learn the importance of entrepreneurship, teamwork and collaboration. The results demonstrate the tremendous impact this program has achieved by reaching girls who might not have considered studying Computer Science or pursuing tech entrepreneurship.

I am an advocate for tech programs like Technovation Challenge, Girls Who Code and FIRST robotics because they have such a positive influence on getting girls curious about and committed to studying Computer Science and other technical subjects. In the case of Technovation, being part of creating a tech startup is a great way to ignite a girl’s interest in STEM.

This year’s regional Showcase, which will feature more than 40 teams, will take place on Saturday, May 13th, at Wentworth Institute of Technology.

This article also appeared in BostonTechMom