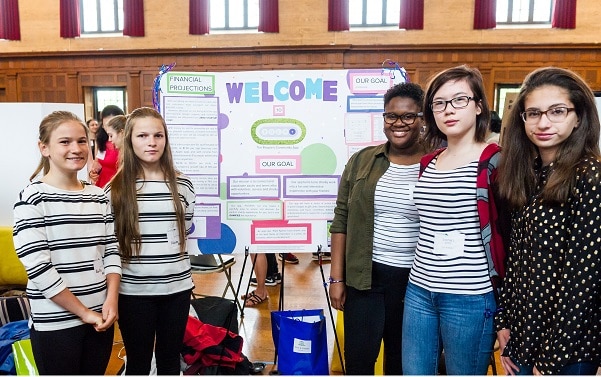 As the Youth Program Director at the Science Club for Girls (SCFG), a non-profit dedicated to fostering excitement, confidence and literacy in STEM for girls, especially those from backgrounds underrepresented in STEM, I deeply value the opportunities that Technovation offers.

This year, three SCFG teams participated in the Technovation Challenge and the final showcase. I sat down with the girls—Andrea, Hannah, Lamisa, Leilani, and Shreyaa — and asked them about their experience. What follows is the lightly edited version of our conversation.

What was it like to participate in an all-girl program?

Leilani: Being in an all-girls club felt very unifying to me, in a sense. It was very easy to make friends, to get along with others, and to ask people for help. That’s not to say that it wouldn’t have been that way in a program that wasn’t exclusive to girls, but that it’s usually easier when it is exclusive.

How do you see your participation in the SCFG Tech Team and the Technovation Challenge affecting your future?

Leilani: Tech Team and Technovation really helped me develop a lot of skills outside the realm of coding, including entrepreneurship, networking, public speaking, user interface design, and filming. A lot of these skills are critical wherever I’ll go in life, which right now I’m thinking will take me somewhere in the field of science.

Hannah: I recommend Technovation to everyone that can participate in it! I can confidently say Technovation was the best opportunity I’ve “stumbled upon”; I was exposed to a world that I never thought I could be a part of, and I learned so much along the way.

I got to meet strong, passionate women of all ages in STEM, and I left every interaction I made through Technovation, whether it was working with my team, receiving help and advice from mentors, or talking to my judges at the showcase, feeling more empowered than I did before. Now, because of programs like SCFG Tech Team and Technovation, I feel more excited and prepared to take on new experiences and more deeply explore STEM as I figure out my place in the world. I could never have predicted two years ago before I started competing in Technovation that I would form genuine, lasting connections that I truly cherish – as a high schooler too!

To whom would you recommend Technovation? Why?

Leilani: I’d recommend Technovation to some of my school friends who are also interested in coding. I know a lot of people who feel like they haven’t had the chance to get to experience something like Technovation, which focuses on so much more than just coding. I think if more people were made aware of it, they’d be interested.

What aspect of Technovation (coding, working in small groups, business development, pitching, etc.) was most impactful for you and why?

Lamisa: Working in small groups was the most beneficial to me because I learned so much about myself. I realized how everyone is a leader but in their own way, especially in tech. Some of us were better with marketing and pitching our idea while others really mastered the programming—there was a job for everyone.

Andrea: Working in small groups was the most impactful because it helped to develop my group work skills. Collaborating in a group is very important for projects like this.

Shreyaa: In my opinion, pitching our app idea to the judges was the most impactful part of

Technovation, by far, because it made me feel like they viewed us as equals and that our idea had some value to it. Honestly, going into the competition can be a bit overwhelming and nerve-racking, with over 100 people and the floor swarmed with posters; but, pitching to judges, while they intently listened and asked detailed questions, helped validate that feeling of accomplishment and team spirit.

I also loved the pitch because it was the moment when we finally got to show everyone our hard work, and it instilled a sense of achievement. Moreover, I enjoyed the team aspect of it and how we all got to learn, succeed, and fail together.

What is something you were surprised to learn about the app development process?

Lamisa: I was surprised to learn how similar some apps were when we researched competition. However, each app had their own spin and features that made their app even better than the one before.

Andrea: Something that surprised me in the app development process was how difficult it was to make an app with many functions while keeping it simple so the user could easily understand and learn how to use the app.

Shreyaa: I was honestly surprised by the amount of business and planning that went into our app development. I went in thinking, like a lot of others, that the process would be dominated by the coding and computer science aspect of the app, but I think the business, financial, and extreme research that needed to be done was unexpected. In the end though, I found that I really enjoyed working on the business and financial plan, and I never would have realized that if I hadn’t pushed myself to put in my best effort for Technovation.

What did your mentors bring to the project?

Lamisa: The mentors were super helpful—emotionally and with their levels of experience. Throughout the whole process, they were there to watch us grow and chime in whenever we needed the support (which was often).

Andrea: My mentors brought previous experience in building software and helped a lot with simplifying the app to make it easier to use. They also helped with keeping us organized and on task.

Shreyaa: Our mentors, Eugene and Corinne, were indubitably the best mentors I have ever met and were amazing at acting as a guiding hand instead of a dominating “manager” of the team! We usually went to them when our group experienced extreme issues or needed help with technical problems. More than anything, our mentors helped us along our journey and were a huge part of our victory, but they never flat out gave us the answer; their main role was as a guide during our learning process, and someone we could turn to for advice about our app.

Registration for the 2018 Technovation Challenge is open. Learn more.